Mabrak Books began with a simple desire: to tell the story of the Caribbean through the experiences of contemporary writers. Our region has a long and varied history and from the gateway of the , we are beginning to tell our story.
We are committed to publishing the work of writers and nourishing the talents of our young writers. We also want to inspire and empower our readers, so we may all become that which we have always envisioned.
I hope you will join us in this wonderful adventure by supporting Mabrak Books either by buying our books or by becoming a sponsor. Mabrak is about freedom.
***
Posted by Mabrak Books at 6:33 AM No comments:


Grandpa Sydney's Anancy Stories, a valuable resource for Black History Month and Caribbean American Heritage Month, may also be used to teach children about mythology and folklore. The informative Study Guide at the back of the book conforms to Bloom's Taxonomy and contains questions that range from comprehension (What is the name of the little boy in the story?) to synthesis and evaluation (Kevin is a bully. Have you ever been bullied by anyone? How did it feel? Write a few sentences about the experience).

In addition, the author reading/lecture combines realia with a PowerPoint presentation about the following topics:

Posted by Mabrak Books at 12:59 PM No comments:

About the Author: Geoffrey Philp

My name is Geoffrey Philp, and I am a writer from Jamaica. I started Geoffrey Philp's Blog Spot to provide readers with information about my writing and the work of contemporary Caribbean and South Florida writers.

Stories and poems about father-son relationships, Anancy (Anansi), and the effects of the Jamaican/Caribbean diaspora have always appealed to me and are the major themes that I've explored in my books--some of which are used as textbooks in many schools, colleges, and universities.

I am available for "Meet the Author" readings/lectures and creative writing workshops where I focus on the craft of writing short stories and poems.


The Abbreviated Bio
Geoffrey Philp is the author of a children’s book, Grandpa Sydney’s Anancy Stories; a novel, Benjamin, My Son; two collections of short stories, Uncle Obadiah and the Alien and Who's Your Daddy?: And Other Stories, and five poetry collections: Exodus and Other Poems, Florida Bound, hurricane center, xango music, and Twelve Poems and A Story for Christmas. His work has been anthologized in both the Oxford Book of Caribbean Short Stories and the Oxford Book of Caribbean Verse. He teaches English and creative writing at Miami Dade College where he is the chairperson of the College Prep. Department.


The Long Story
I was born in Kingston, Jamaica, and I attended Mona Primary and Jamaica College, where I studied literature under the tutelage of Dennis Scott. When I left Jamaica in 1979, I went to Miami Dade College and after graduating, I studied Caribbean, African and African-American literature with Dr. O.R. Dathorne and creative writing with Lester Goran, Evelyn Wilde Mayerson, and Isaac Bashevis Singer. Since then, I have attended workshops with Derek Walcott , Edward Albee, and Israeli playwright, Matti Meged. As a James Michener Fellow at the University of Miami, I studied poetry under Kamau Brathwaite and fiction with George Lamming.

In 1990, I published my first book of poems, Exodus and Other Poems, and four other poetry collections have followed: Florida Bound (1985), hurricane center (1998), xango music (2001), and Twelve Poems and A Story for Christmas (2005). I have also written a book of short stories, Uncle Obadiah and the Alien (1997), and a novel, Benjamin, My Son, which was nominated for the IMPAC Dublin Literary Prize.

I continue to work on many projects such as a children's book, Grandpa Sydney's Anancy Stories, and just completed a book of short stories, Who's Your Daddy? and Other Stories (Peepal Tree Press, 2009), a hypertext novel, Virtual Yardies, and a novel, A LoveSong for Kathryn, which is set in South Florida and begins on Bloomsday. The major stars of the novel are a hurricane, a missing daughter, and a Rastaman—kind of Zora Neale Hurston meets South Florida and Jamaica.


I hope you will enjoy reading Grandpa Sydney's Anancy Stories.

Posted by Mabrak Books at 11:02 AM No comments: 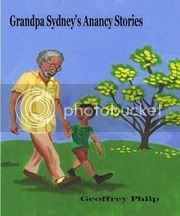 You will need Adobe or a similar program to open the e-book.